When We Left Cuba by Chanel Cleeton @ Silver’s Reviews. 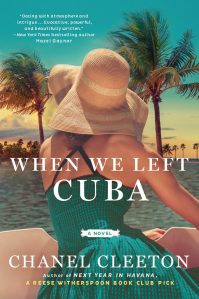 The Cuban Revolution took everything from sugar heiress Beatriz Perez–her family, her people, her country. Recruited by the CIA to infiltrate Fidel Castro’s inner circle and pulled into the dangerous world of espionage, Beatriz is consumed by her quest for revenge and her desire to reclaim the life she lost.

As the Cold War swells like a hurricane over the shores of the Florida Strait, Beatriz is caught between the clash of Cuban American politics and the perils of a forbidden affair with a powerful man driven by ambitions of his own. When the ever-changing tides of history threaten everything she has fought for, she must make a choice between her past and future–but the wrong move could cost Beatriz everything–not just the island she loves, but also the man who has stolen her heart…

“This sounds interesting. I like immigrant stories, especially ones that occur during times of significant societal change.”

On the Same Page by N. D. Galland found at BermudaOnion’s Weblog and Book Dilettante.

Martha’s Vineyard has two distinct “personalities”—one characterized by its tanned and polished summer people; the other represented by the small-town, salt-of-the-earth year-round residents. The island even has two newspapers, each appealing to its distinct readership. Over the years, an intense rivalry has grown between the two papers; in fact, neither paper will work with writers who have any relationship to the other paper.

Johanna Howes is a Vineyard girl who left the island at the age of eighteen and never looked back. She went to college on the mainland and moved to the Big City to start a career as a journalist. Now she’s returned to take care of her aging Uncle Hank. As neither paper can pay her enough to live on, she creates a false identity so that she can write for both papers at once. Often this means writing the same story twice, coming at it from opposite ends of the spectrum.

Before long, Johanna finds herself caught up in a messy Island political situation. A wealthy, seasonal resident is suing the town government for the right to land his private helicopter on his property. When Johanna agrees to go for a cup of coffee with the handsome man she meets at a zoning board meeting, she has no idea that she has just made a date with Orion Smith, the wealthy off-Islander who is causing all the ruckus. And what he doesn’t know is that Johanna has been assigned by both Island papers to cover the story.

Scrambling to keep her various identities straight and separate from each other, Johanna desperately tries to find a graceful way out of the mess she’s created. But doing so will likely get her into trouble or cause her to lose her writing gigs…not to mention jeopardize her chance at a budding romance with a man she’s doing her best not to fall for.

“My undergraduate program was Journalism so this romantic comedy about a journalist caught my eye.”

Marcy is busy helping her customers make hand-crafted ornaments at her embroidery shop, the Seven-Year Stitch. But despite the yuletide bustle, when her friend Captain Moe asks for her help, she can’t refuse—especially when the favor is to play the elf to his Santa for sick children at a local hospital. Despite the ridiculous outfit, Marcy finds herself enjoying spreading cheer—until the hospital’s administrator is found murdered.

Although the deceased had plenty of people willing to fill her stocking with coal, evidence pins the crime on Moe. Now it’s up to Marcy, with the help of her police officer boyfriend Ted and her Irish Wolfhound Angus, to stitch together the clues to clear Moe’s name—before someone else winds up crossed off Santa’s list for good…

National Geographic Kids: Fly with Me at Savvy Verse & Wit. 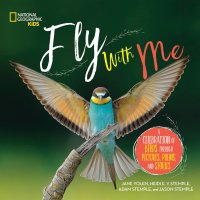 This thoughtful and beautifully curated collection of our flying, feathery friends highlights the role birds play in human life from centuries ago to present day. While it’s beautiful, it’s also full of valuable real science about these wondrous creatures. From history and behavior to spotting and photographing, there’s sure to be something for every bird fan in your flock. Young birders will learn all about migration and the importance of habitat conservation. They’ll find stories about bird rescues and fun facts about the fastest, strongest, and tiniest fliers. They’ll also discover the best bird nests, sweet songs to sing, ways to listen for and identify the birds around them, and more. Paired with stunning art and photography and beautiful design, this treasury is sure to become a classic for bird enthusiasts of all ages.

Fly with Me was created to help celebrate Year of the Bird, National Geographic’s 2018 initiative to bring awareness to the plight of birds around the world.