Each week will share a few books that caught our eye from that week’s Mailbox Monday.

On average 23 people a year disappear from the world’s cruise ships. They are written off as accidents or suicides. But what if they’re not?

Five years ago Martin Schwarz, a police psychologist, lost his wife and son. They were holidaying on a cruise ship when they simply vanished. A lacklustre investigation was unable to shed any light on what happened – murder-suicide being the coroner’s verdict. It is a verdict that has haunted Martin ever since, blighting his life. But then he is contacted by an elderly woman, a writer, who claims to have information regarding their fate and wants him to come on board The Sultan of the Seas immediately.

She explains that his wife and son are not the only mother and child pair to have disappeared. Only a few months ago another mother and daughter also vanished. She believes there may be a serial killer on board.

But when the missing daughter reappears – carrying the teddy bear of Martin’s missing son – it becomes apparent that the truth could be much, much worse…

Hood Feminism: Notes from the Women That a Movement Forgot by Mikki Kendall found at Sam Still Reading.

Today’s feminist movement has a glaring blind spot, and paradoxically, it is women. Mainstream feminists rarely talk about meeting basic needs as a feminist issue, argues Mikki Kendall, but food insecurity, access to quality education, safe neighborhoods, a living wage, and medical care are all feminist issues. All too often, however, the focus is not on basic survival for the many, but on increasing privilege for the few. That feminists refuse to prioritize these issues has only exacerbated the age-old problem of both internecine discord and women who rebuff at carrying the title. Moreover, prominent white feminists broadly suffer from their own myopia with regard to how things like race, class, sexual orientation, and ability intersect with gender. How can we stand in solidarity as a movement, Kendall asks, when there is the distinct likelihood that some women are oppressing others?

“The premise of this book sounds realistic to me and it caught my eye.” 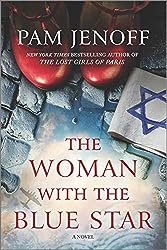 The Woman With the Blue Star by Pam Jenoff from Silver’s Reviews.

1942. Sadie Gault is eighteen and living with her parents amid the horrors of the Kraków Ghetto during World War II. When the Nazis liquidate the ghetto, Sadie and her pregnant mother are forced to seek refuge in the perilous sewers beneath the city. One day Sadie looks up through a grate and sees a girl about her own age buying flowers.

Ella Stepanek is an affluent Polish girl living a life of relative ease with her stepmother, who has developed close alliances with the occupying Germans. Scorned by her friends and longing for her fiancé, who has gone off to war, Ella wanders Kraków restlessly. While on an errand in the market, she catches a glimpse of something moving beneath a grate in the street. Upon closer inspection, she realizes it’s a girl hiding.

Ella begins to aid Sadie and the two become close, but as the dangers of the war worsen, their lives are set on a collision course that will test them in the face of overwhelming odds. Inspired by harrowing true stories, The Woman with the Blue Star is an emotional testament to the power of friendship and the extraordinary strength of the human will to survive.