MARTHA:
Stealing Time by Rebecca Bowyer found at Book’d Out. 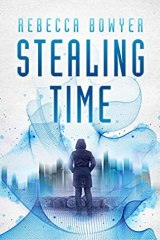 They’ll kill to get more time. She’ll die to stop them.

In a world where each person’s life span is limited by law, time is a lucrative commodity that some people will do anything to get more of.

Fourth-dimension physicist, Dr Varya Galanos, invented the technology that time thieves used to murder children by stealing their remaining years of life. Although it was destroyed 10 years ago, and the thieves brought to justice, she still suffers from the burden of guilt.

Masquerading as a lowly lab technician at the Minor Miracles Foundation, Varya finds a certain peace searching for cures for rare childhood diseases, like the one which took her 4-year-old son, Kir, away from her.

The Foundation is secretly funded by Varya and her employee and confidante, Marisa Volkov, by selling illicit time tabs to wealthy patrons. When dissolved on the tongue, a single time tab grants a person four extra hours in their day.

The time tab technology is highly valued – and highly illegal – in a society where Time Chips are inserted into each child’s brain stem at birth. Lives are limited to just sixty-five years to conserve the planet’s ever-dwindling resources.

Varya’s tenuous peace is shattered when children start disappearing again. She fears the worst – that the time thieves have returned and have somehow resurrected the technology to steal precious years from children.

Varya is the only one who can find a way to reverse the time drains and save the returned children. But doing so could cost the lives of those she holds dearest.

When her best friend’s son becomes a victim, returned with just hours to live, she is faced with an impossible choice.

“This sounds like a great mix of suspense and time travel – elements sure to catch my eye.”

The Shell Collector. by Nancy Naigle found at Bookfan. 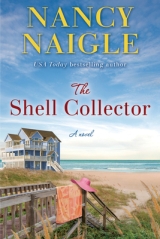 A touching novel of love and loss, a friendship that crosses generations, and learning how even the smallest gifts can change a life for good, from USA Today bestselling author Nancy Naigle.

Amanda Whittier had no idea when she said goodbye to her husband, Jack, the morning he deployed that it would be the last time she’d ever see him. Two years later, she’s still trying to put her life with their two children back together. She buys a tiny beach cottage in the town near where they’d wed, and what comes next is as unpredictable as what the tide brings in.

An unlikely friendship with an older woman who has lived there her whole life puts a new lens on Amanda’s situation, and Amanda begins finding shells with quotes in them that seem to guide and inspire her to face her fears. She uncovers local lore about these shells from as far back as thirty years ago that gives her purpose as she chases the stories behind them.

One shell leads her to someone she hasn’t spoken to since the day she laid her husband to rest. As their friendship unfolds, Amanda begins to believe that he just might hold the key to her future happiness.

“I had three books that made the shortlist for my second choice. I selected this novel that sounds good even though I am not a big fan of friendship drama stories. Sometimes you just need to be willing to stretch. :-)” 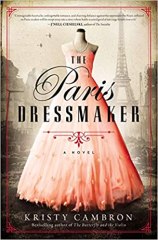 The Paris Dressmaker by Kristy Cambron at Coletta’s Kitchen Sink.

Based on true accounts of how Parisiennes resisted the Nazi occupation in World War II—from fashion houses to the city streets—comes a story of two courageous women who risked everything to fight an evil they couldn’t abide.

Paris, 1939. Maison Chanel has closed, thrusting haute couture dressmaker Lila de Laurent out of the world of high fashion as Nazi soldiers invade the streets and the City of Lights slips into darkness. Lila’s life is now a series of rations, brutal restrictions, and carefully controlled propaganda while Paris is cut off from the rest of the world. Yet in hidden corners of the city, the faithful pledge to resist. Lila is drawn to La Resistance and is soon using her skills as a dressmaker to infiltrate the Nazi elite. She takes their measurements and designs masterpieces, all while collecting secrets in the glamorous Hôtel Ritz—the heart of the Nazis’ Parisian headquarters. But when dashing René Touliard suddenly reenters her world, Lila finds her heart tangled between determination to help save his Jewish family and bolstering the fight for liberation.

Paris, 1943. Sandrine Paquet’s job is to catalog the priceless works of art bound for the Führer’s Berlin, masterpieces stolen from prominent Jewish families. But behind closed doors, she secretly forages for information from the underground resistance. Beneath her compliant façade lies a woman bent on uncovering the fate of her missing husband . . . but at what cost? As Hitler’s regime crumbles, Sandrine is drawn in deeper when she uncrates an exquisite blush Chanel gown concealing a cryptic message that may reveal the fate of a dressmaker who vanished from within the fashion elite.

“Everyone should have known this would be on my list.” 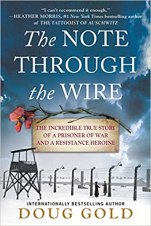 The Note Through the Wire by Doug Gold at Book Reviews by Linda Moore.

In the heart of Nazi-occupied Europe, two people meet fleetingly in a chance encounter. One is an underground resistance fighter; the other a prisoner of war. A crumpled note passes between these two strangers and sets them on a course that will change their lives forever.

The Note Through The Wire is the true story of Josefine Lobnik, a Yugoslav partisan heroine, and Bruce Murray, a New Zealand soldier, who, due to a succession of near-impossible coincidences, discover love in the midst of a brutal war.

Woven through their tales of great bravery, daring escapes, betrayal, torture and retaliation is their remarkable love story that survived against all odds. This is an extraordinary account of two ordinary people living through the unimaginable hardship of Hitler’s barbaric regime.

“Martha ended up alerting me to the fact that I missed one of those coveted WWII books. So, I just had to add it to the list.”

What Books Caught Your Eyes This Week?