The Madman’s Library: The Strangest Books, Manuscripts and Other Literary Curiosities from History by Edward Brooke-Hitchin found at Reviews by Martha’s Bookshelf.

From the Qur’an written in the blood of Saddam Hussein, to the gorgeously decorated fifteenth-century lawsuit filed by the Devil against Jesus, to the most enormous book ever created, The Madman’s Library features many long forgotten, eccentric, and extraordinary volumes gathered from around the world.

Books written in blood and books that kill, books of the insane and books that hoaxed the globe, books invisible to the naked eye and books so long they could destroy the Universe, books worn into battle and books of code and cypher whose secrets remain undiscovered. Spell books, alchemist scrolls, wearable books, edible books, books to summon demons, books written by ghosts, and more all come together in the most curiously strange library imaginable.

Featuring hundreds of remarkable images and packed with entertaining facts and stories to discover, The Madman’s Library is a captivating compendium perfect for bibliophiles, literature enthusiasts, and collectors intrigued by bizarre oddities, obscure history, and the macabre.

“I can’t resist books about books.” 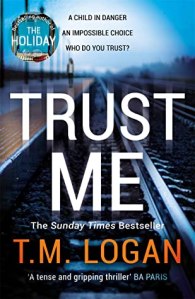 Trust Me by T.M. Logan found at An Interior Journey.

Two strangers, a child, and a split second choice that will change everything . . .

Ellen was just trying to help a stranger. That was how it started: giving a few minutes respite to a flustered young mother sitting opposite her on the train. A few minutes holding her baby while the mother makes an urgent call. The weight of the child in her arms making Ellen’s heart ache for what she can never have.

The train pulls into a station and Ellen is stunned to see the mother hurrying away down the platform, without looking back. Leaving her baby behind. Ellen is about to raise the alarm when she discovers a note in the baby’s bag, three desperate lines scrawled hastily on a piece of paper:

Why would a mother abandon her child to a stranger? Ellen is about to discover that the baby in her arms might hold the key to an unspeakable crime. And doing the right thing might just cost her everything . . . 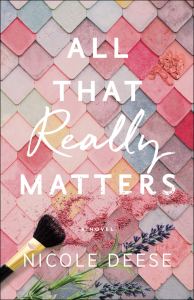 All That Really Matters by Nicole Deese

Molly McKenzie’s bright personality and on-trend fashion and beauty advice have earned her an impressive social media following, as well as a big paycheck each month. When her manager-turned-boyfriend says she has an audition to appear as a host on a makeover show that nominates underprivileged youth, her dream of further fame seems to be coming true. There’s just one catch: she has little experience interacting with people in need.

When her manager-boyfriend convinces her to partner with a local organization, she begins volunteering with a summer youth program. The program’s director, Silas Whittaker, challenges her at every turn, but she swiftly grows more attached to the kids–and him–every day.

As Molly experiences an acceptance unlike anything she’s known, she wrestles with the lies she’s been believing about herself for years. She thought she knew what mattered most in life, but maybe she’s had it wrong this whole time, and there’s more to being truly seen than what she’s built her entire life on.

“The cover made me curious but the blurb really caught my interest. ”

“What books caught your eyes this week? ”