One day, the life of a tea monk is upended by the arrival of a robot, there to honor the old promise of checking in. The robot cannot go back until the question of “what do people need?” is answered.

But the answer to that question depends on who you ask, and how.
They’re going to need to ask it a lot.

“The cover made me wonder, and the blurb pulled me in for another human and robot story.” 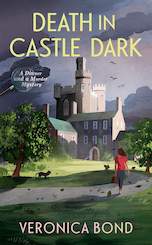 Actor Nora Blake finds her dream job when she is cast in a murder-mystery troupe that performs in an imposing but captivating old castle. When she stumbles upon a real murder, things take a nightmarish turn in this first book in an exciting new series.

Maybe it was too good to be true, but when Nora Blake accepted the job from Derek Corby, proprietor of Castle Dark, she could not see any downsides. She would sink her acting chops into the troupe’s intricately staged murder-mystery shows, earn free room and board in the fairy tale-like castle, and make friends with her new roommates, which include some seriously adorable kittens.

But something sinister lurks behind the walls of Castle Dark. During Nora’s second performance, one of her castmates plays the part of the victim a little too well. So well, in fact, that no one can revive him. He has been murdered. Not ready to give up her dream gig–or to be the next victim–Nora sets out to see which one of her fellow actors has taken the role of a murderous real-life villain.

“Castles, theatre troupe, and murder sound like a good mix. And I liked the cover too.”

In PLUME #9 you will find smart and sassy conversation, both heartbreaking and sidesplitting narratives, poems of deep engagement that will keep you rehashing them on your drive home. Each poet has brought a ‘plus one’ for the host to get to know…

The poems mingle and flirt, air kissing images that will make you giddy, make you feel less alone.

“I love when anthologies place poems in a dialogue, and this one also has an interview with Diane Seuss, who recently released a great book of sonnets, Frank: Sonnets.”

Resistance fighter Antonia is out in the forest behind her family’s beloved farm when the Nazi soldiers arrive. As she sees her sister Lena and her young nephews herded towards the trucks, guns pointed at their heads, she faces a split-second, heart-wrenching decision: to stay hidden, stay free and continue the fight. Or to give herself up and go with her family to protect them—no matter what lies ahead.

As she clutches her nephew’s chubby hand in hers, her other arm tight around Lena, she knows she has made the right choice. And as the truck rattles towards a brutal labor camp, and they start to wonder what fate has in the store for them, Antonia’s only thought is of how to escape.

Because before they were captured, Antonia worked tirelessly to free her country from those who had turned it into a bloody battleground. By her side had been clever, handsome Viktor. The man she was to marry, whose love shone like a light in the darkness of war surrounding them.

Antonia does not know if Viktor has been caught or executed. But she knows she must try to find a way back to him and she cannot wait any longer to be saved. Her precious nephews will die without proper food and they could all be killed at any moment.

“WWII novels always make my lists, and I really like the ones about resistance fighters, etc.”

Nightbitch by Rachel Yoder from A Universe in Words

An ambitious mother puts her art career on hold to stay at home with her newborn son, but the experience does not match her imagination. Two years later, she steps into the bathroom for a break from her toddler’s demands, only to discover a dense patch of hair on the back of her neck. In the mirror, her canines suddenly look sharper than she remembers. Her husband, who travels for work five days a week, casually dismisses her fears from faraway hotel rooms.

As the mother’s symptoms intensify, and her temptation to give in to her new dog impulses peak, she struggles to keep her alter-canine-identity secret. Seeking a cure at the library, she discovers the mysterious academic tome which becomes her bible, A Field Guide to Magical Women: A Mythical Ethnography, and meets a group of mothers involved in a multilevel-marketing scheme who may also be more than what they seem. 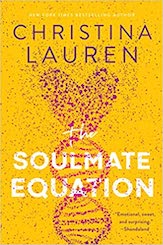 The Soulmate Equation by Christina Lauren from Sam Still Reading

Single mom Jess Davis is a data and statistics wizard, but no amount of number crunching can convince her to step back into the dating world. Raised by her grandparents–who now help raise her seven-year-old daughter, Juno–Jess has been left behind too often to feel comfortable letting anyone in. After all, her father’s never been around, her hard-partying mother disappeared when she was six, and her ex decided he wasn’t “father material” before Juno was even born. Jess holds her loved ones close, but working constantly to stay afloat is hard…and lonely.

But then Jess hears about GeneticAlly, a buzzy new DNA-based matchmaking company that’s predicted to change dating forever. Finding a soulmate through DNA? The reliability of numbers: This Jess understands. At least she thought she did, until her test shows an unheard-of 98% compatibility with another subject in the database: GeneticAlly’s founder, Dr. River Pena. This is one number she can’t wrap her head around, because she already knows Dr. Pena. The stuck-up, stubborn man is without a doubt not her soulmate. But GeneticAlly has a proposition: Get to know him and we’ll pay you. Jess–who is barely making ends meet–is in no position to turn it down, despite her skepticism about the project and her dislike for River. As the pair are dragged from one event to the next as the “Diamond” pairing that could make GeneticAlly a mint in stock prices, Jess begins to realize that there might be more to the scientist–and the science behind a soulmate–than she thought.

“Had me at soulmate.”