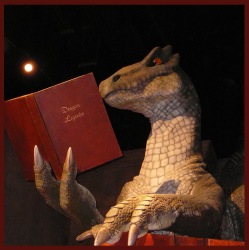 The Ringmaster’s Wife by Kristy Cambron at Library of Clean Reads. 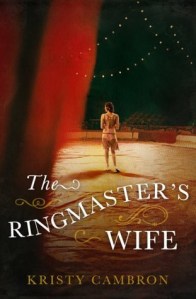 Rosamund Easling is no stranger to opulence. As the daughter of an earl, she’s grown up with every comfort money can buy. But when hard times befall the family’s Yorkshire estate in the aftermath of the Great War, Rosamund’s father sells her beloved horse, setting the stage for a series of events that would extend beyond even her wildest dreams.

Though expected to marry for a title instead of love, Rosamund feels called to a different life – one of adventure outside the confines of a ladies’ parlor. She abandons all she’s known and follows in pursuit as her horse is shipped to the new owner – an American entertainer by the name of John Ringling. Once introduced to the Ringling Brothers’ circus and knowing she has much to learn, Rosamund agrees to a bareback riding apprenticeship in the shadow of the Ringlings’ winter home—Ca’D’Zan. It is at that mansion, in what would become the last days of the enigmatic Mable Ringling’s life, that Rosamund finds a deeper sense of purpose in the life she’s been given, and the awakening of faith in her heart.

With a supporting cast of characters as mysterious and dazzling as the Ringlings’ big-top world, Rosamund’s journey takes her from the tradition of the English countryside to the last days of America’s Roaring ‘20s—a journey that forever changes what one life might have been.

Let’s Just Say It Wasn’t Pretty by Diane Keaton at Curl Up and Read. 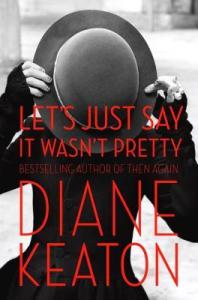 Diane Keaton has spent a lifetime coloring outside the lines of the conventional notion of beauty. In Let’s Just Say It Wasn’t Pretty, she shares the wisdom she’s accumulated through the years as a mother, daughter, actress, artist, and international style icon. This is a book only Diane Keaton could write—a smart and funny chronicle of the ups and downs of living and working in a world obsessed with beauty.

In her one-of-a-kind voice, Keaton offers up a message of empowerment for anyone who’s ever dreamed of kicking back against the “should”s and “supposed to”s that undermine our pursuit of beauty in all its forms. From a mortifying encounter with a makeup artist who tells her she needs to get her eyes fixed to an awkward excursion to Victoria’s Secret with her teenage daughter, Keaton shares funny and not-so-funny moments from her life in and out of the public eye.

For Diane Keaton, being beautiful starts with being true to who you are, and in this book she also offers self-knowing commentary on the bold personal choices she’s made through the years: the wide-brimmed hats, outrageous shoes, and all-weather turtlenecks that have made her an inspiration to anyone who cherishes truly individual style—and catnip to paparazzi worldwide. She recounts her experiences with the many men in her life—including Warren Beatty, Jack Nicholson, Al Pacino, and Sam Shepard—shows how our ideals of beauty change as we age, and explains why a life well lived may be the most beautiful thing of all.

The Woman in the Photo by Mary Hogan at BookNAround.

In this compulsively-readable historical novel, from the author of the critically-acclaimed Two Sisters, comes the story of two young women—one in America’s Gilded Age, one in scrappy modern-day California—whose lives are linked by a single tragic afternoon in history.

1888: Elizabeth Haberlin, of the Pittsburgh Haberlins, spends every summer with her family on a beautiful lake in an exclusive club. Nestled in the Allegheny Mountains above the working class community of Johnstown, Pennsylvania, the private retreat is patronized by society’s elite. Elizabeth summers with Carnegies, Mellons, and Fricks, following the rigid etiquette of her class. But Elizabeth is blessed (cursed) with a mind of her own. Case in point: her friendship with Eugene Eggar, a Johnstown steel mill worker. And when Elizabeth discovers that the club’s poorly maintained dam is about to burst and send 20 million tons of water careening down the mountain, she risks all to warn Eugene and the townspeople in the lake’s deadly shadow.

Present day: On her eighteenth birthday, genetic information from Lee Parker’s closed adoption is unlocked. She also sees an old photograph of a genetic relative—a 19th Century woman with hair and eyes likes hers—standing in a pile of rubble from an ecological disaster next to none other than Clara Barton, the founder of the American Red Cross. Determined to identify the woman in the photo and unearth the mystery of that captured moment, Lee digs into history. Her journey takes her from California to Johnstown, Pennsylvania, from her present financial woes to her past of privilege, from the daily grind to an epic disaster. Once Lee’s heroic DNA is revealed, will she decide to forge a new fate?

With Malice by Eileen Cook at Luxury Reading and BermudaOnion. 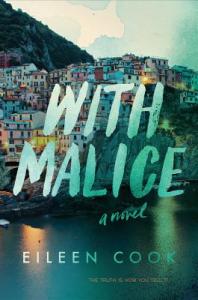 For fans of “We Were Liars” and “The Girl on the Train” comes a chilling, addictive psychological thriller about a teenage girl who cannot remember the last six weeks of her life. Eighteen-year-old Jill Charron’s senior trip to Italy was supposed to be the adventure of a lifetime. And then the accident happened. Waking up in a hospital room, her leg in a cast, stitches in her face, and a big blank canvas where the last 6 weeks should be, Jill comes to discover she was involved in a fatal accident in her travels abroad. She was jetted home by her affluent father in order to receive quality care. Care that includes a lawyer. And a press team. Because maybe the accident…wasn’t an accident. Wondering not just what happened but what she did, Jill tries to piece together the events of the past six weeks before she loses her thin hold on her once-perfect life.

After losing their life savings in a Ponzi scheme, Maddie, Avery, and Nikki have banded together to make the most of what they have left, using their determination, ingenuity, guts, and a large dose of elbow grease. It’s Maddie’s daughter Kyra who stumbles across a once glorious beachfront hotel that has fallen into disrepair. The opportunity to renovate this seaside jewel is too good to pass up—especially when they come up with the idea of shooting their own independent television show about the restoration. What could possibly go wrong?

Everything. With the cameras rolling, Maddie’s second-chance romance with her all-too-famous new boyfriend gets complicated, Avery struggles with grief over the loss of her mother, and Nikki’s reluctance to commit to the man who loves her could leave her to face the biggest challenge of her life. Even the hotel seems to be against them, when their renovation uncovers a decades-old unsolved murder which just might bring their lives tumbling down all over again… 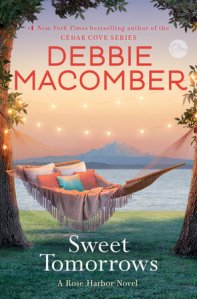 The much-anticipated conclusion to Debbie Macomber’s beloved Rose Harbor series, set in the picturesque town of Cedar Cove, Sweet Tomorrows is a vibrant and poignant novel of letting go of fear, following your heart, and embracing the future—come what may.

Nine months ago, Mark Taylor abruptly left Cedar Cove on a perilous mission to right a wrong from his past. Though Mark finally confessed his love for her, innkeeper Jo Marie Rose is unsure if he’s ever coming back. The Rose Harbor Inn barely seems the same without Mark, but Jo Marie can’t bear to lose herself in grief once more. Determined to move forward, she begins dating again, and finds companionship when she takes on a boarder who is starting a new chapter herself.

Recovering from a twice-broken heart, Emily Gaffney, a young teacher, is staying at the inn while she looks for a home of her own. Having given up on marriage, Emily dreams of adopting children someday. She has her eye on one house in particular—with room for kids. Although Emily’s inquiries about the house are rudely rebuffed, her rocky start with the owner eventually blossoms into something resembling friendship. But when the relationship verges on something more, Emily will have to rethink what she truly wants and the chances she’s willing to take.

The inn seems to be working its magic again—Emily opening herself up to love, Jo Marie moving on—until Jo Marie receives shocking news.

With Debbie Macomber’s trademark charm and wisdom, Sweet Tomorrows brings to a close the journeys of cherished characters who feel like old friends. Macomber has created an enchanting place in the Rose Harbor Inn that readers will never forget.